The media industry as a whole has a very big umbrella. Entertainment has become a part and parcel of media in recent times making it more viable and convenient for the audience. The growth has promulgated the audience into a new arena and made the customers. The customer-based interventions have put the industry into a new perspective of competition based growth.

The media and entertainment industry in India is one of the fastest-growing industries in the country. Its various segments—film, television, advertising, prints media, music and digital among others—have witnessed tremendous growth in the last few years.

The media and entertainment industry can be broadly divided into the following categories: 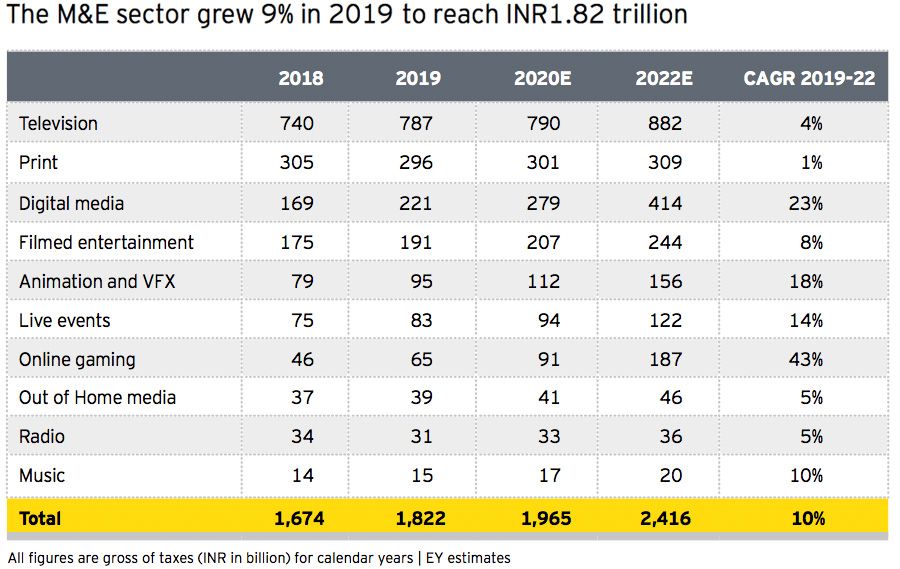 The introduction of terrestrial transmission in the form of private TV channels consisting of entertainment and news channels has begun a new era. Before the coming of private TV channels, there was only Doordarshan, as it is controlled and managed by the government. So there was a meaning of competition at that time. After 1992, there were a few channels namely ZEE TV, Sony TV and Star TV. There was very little competition at that time and with the time follows, the no. of channels so is the competition.

Following trends can be seen in the Television in the recent times:

The Indian print media industry has grown phenomenally over the past few years. Most of the newspapers and magazines are in Hindi and their circulation is also large no. as compared to English publications.

Following trends can be seen in the Print media industry in the recent times:

In India, the radio was started by All India Radio (AIR) in the 1950s. Because of its reach, the radio has a reach of about 99% in India. The radio industry is a very small part of the broadcasting universe. At Rs. 2,300 crores, the Radio industry comprises about 5% of the broadcasting sector in India. It has a very modest market share which makes it non-viable for its players in the market.

Following trends can be observed in the Radio industry in the recent times:

Films in India have always been a mirror of society. The Indian film industry is the biggest in the world in terms of the production of films. They distract us from our monotonous problems by diverting our attention to the visuals and in the process often extracting emotions or providing relaxation, thereby entertaining us. They also allow social interaction by providing an opportunity to discuss common topics of interest. More often than not we relate to the characters of the movie, thus creating a sense of connection and sometimes even reinforcing our values. Movies intensify some aspects of life such as comedy, romance, war etc. It plays the role of the magnifying glass and it is a platform to quench curiosity about a serious subject.

Following trends can be witnessed in the coming times in India’s film industry:

The digital media industry in India has become the most important platform. There is a big debate in the initial stages between electronic and print media and who owns it. Electronic media says that it is seen on a screen so it belongs to them. On the other hand, print media believes that the content is in print form so it will be in print media. Then in the 2000s, there was the starting of content showing on the computer. Does the question arise what is digital media?

Digital media is digitized content that can be transmitted over the internet or computer networks. This can include text, audio, video, and graphics. This means that news from a TV network, newspaper, magazine, etc. that is presented on a Web site or blog can fall into this category. We should also know what constitutes digital media.

There are 3 types of digital media:

Earned Media: Customer’s recommendation by word of mouth or through social media4.

The following trends can be seen in the digital media industry in India:

OTT (Over The Top) 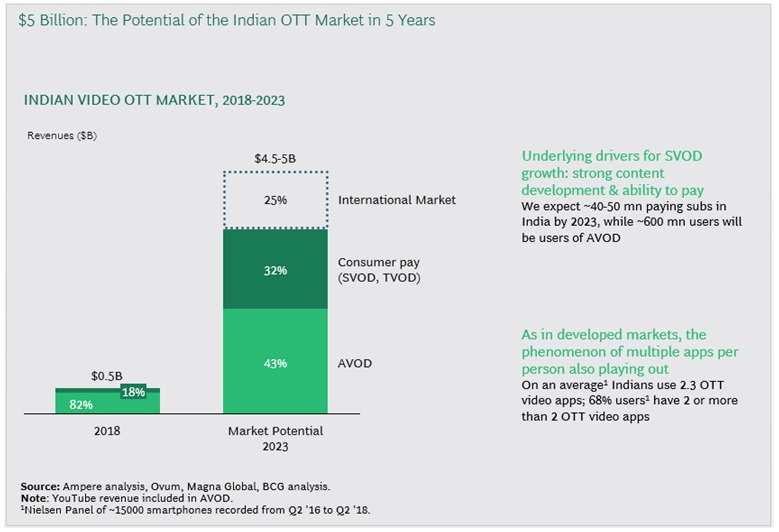 Following trends can be seen recently in OTT:

One of the most important contributions of technology in the media sector is social media. Social media is one sphere which has changed the dynamics of how we see media and communication. It has amalgamated all the things on one single platform. The introduction of android based mobile has revolutionized social media. It gives users endless opportunities to express themselves.

With the ease of internet access, the number of active social media users in India stood at 330 million in 2019 and it is expected to reach 448 million by 2023.

The entry of WhatsApp into India’s digital market boosted app usage, with a doubling in rural areas in recent years. Data shows that the reach of the messaging service extends wider than just urban areas. Other popular apps include TikTok and Instagram.

The social video app TikTok has been a huge hit in India, it has reached 1.5 billion downloads worldwide on the App Store as well as Google Play and India leads the chart with 466.8 million or about 31% of all unique installs. Prominent social media apps include Twitter, Watsapp, Facebook, Instagram, Tinder, Helo etc.

Smartphones are increasingly becoming the primary screen for Indian customers, which means, the smartphone and its applications become the principal source of news for about 35% of the country’s internet users, a majority of whom use one or more social networks.

Rural India has 264 million internet users and this is expected to reach 304 million in 2020. Rural India has a sizable portion that is devoid of internet access. Thus, there is immense headroom for growth which will contribute to an increase in the overall internet population over the next few years.

Following trends can be observed in the social media:

The presence of modern communication technologies has made the world a global village where anybody can have access to anything, anywhere. We are ushering into a new era of global communication. We can fight and create awareness of diseases like HIV/AIDS or in recent times Corona Pandemic. The epic rise in the proportion of media especially the new media and social media has created a lot of opportunities to interact. The media and entertainment industry is riding a horse which is galloping with a whirling speed. More innovations will make the media and entertainment industry in India more competitive and will also create job opportunities